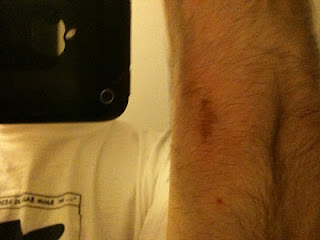 Changed days for the Primevals - we sat before the gig and blethered over an espresso, a Guinness, a Fiery Ginger Ale .... not the previous large numbers of Red Stripes or Furstenbergs.

The gig went well, and we were well received. We had one or two slightly iffy moments, which were probably not too noticeable unless you know what is meant to happen at those points. All in all, a successful and enjoyable first gig for this lineup.
Rhod Burnett, a tribal elder and original Primevals drummer was there and enjoyed it. It's always good to see Rhod. Ady Gillespie (who, with Rhod, runs The Nutmeg City Orchestra) was also there, enthusiastic and on good form. A small gathering of the tribes, with Doods from the Word NW Massive representing and my friend Dave from work.
Rehearsal on Tuesday, then a break until we hit London. There is some to & fro with Paris - the original venue went on fire, and won't have a certificate for bands in time for our gig. There are alternatives lined up now. And we're playing in a record shop in Nimes as part of International Record Store Day.
My leather jacket didn't offer much protection against the sharp edge of the Telecaster - I've got a rather nippy friction burn on my forearm. I didn't think I would need a strum-guard for a 40 minute set. I'll learn.