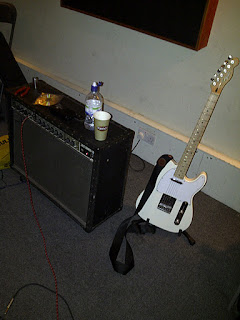 B2 is a really good rehearsal  setup - nice drumkit, good PA, good guitar amps, reasonably clean. We've been rehearsing in places run by Steve (from the original Berkeley St which was a similar high-end setup) since the very first Primevals rehearsal in 1983. They've now got a pretty good coffee machine too.
Tonight went well - ran through the set from Tuts, then went over a couple of them again to settle and clarify some things. When we played Spiritual at Tuts, the slide part was rather spacy - the chords I was meant to be playing had slipped my mind, so there was a kind of pedal steel feel to some of it.

All went well tonight, and we added "Walk In My Footsteps" which was on the band's first single after I left (for the first time, in 1985.) I was always touched by the dedication to me which I only found out about when I saw the single - it says "Eternal Thanks - Hotfire". (That was my nickname)
So we're off to London by bus, by train , and by car. We will be remembering the daftness of previous London trips - "Collar up, big man - you're in London!" and so on.
Current plan is that we'll be onstage at the Water Rats at 11. Whole thing over by 12:15. That could change. If you're coming to the gig, I'm looking forward to meeting up with some of my London-based friends. I'll update on twitter if things change (@twrafferty)
Now, some Berberana and some Mature Cheddar, and a chance to listen to the final mixes of the recent recordings at Green Door. I couldn't make the time to go to the mix too.That was unusual - wouldn't have happened in my own band, The Beat Poets. I write and arrange most of the material and make the logistic arrangements too - from organising rehearsals to making sure the soundcheck goes OK to remembering the horn arrangements. It is easier just "being the guitarist". But I do need the Beat Poets too - we are our own thing, kings of our daft world, a way for us all to make music that sounds just like us.
I'm blessed to have the chance to do this, still - the support of my family, the rocking vibe of my great friends in the band. A chance to wear new hats - my sister-in-law works in the same area as Michael, the singer. She bumped into him today. We had a family dinner tonight, and when I appeared she said "I saw Michael earlier - wearing exactly the same hat and with the same scarf!" We are independently styled - but we're stylin'!
Posted by elhombremalo at 16:36