Back in the saddle

I'm a guitarist. For 25 years, I've played in The Beat Poets, taking our brand of surfing instrumental rock & roll wherever we can. We've released records, supported our hero Dick Dale, been on TV and radio, and had a great deal of fun. The Beat Poets are on myspace at http://www.myspace.com/originalbeatpoets.

Before I formed the Beat Poets I played guitar in The Primevals, helping form the band in 82, finally leaving in late 85. I have pretty much managed to intertwine the Beat Poets with a regular job, which would have been pretty much impossible with the level of gigging that the Primevals were doing in 86.

I've kept in touch with the guys down the years, and Big John Honeyman from the band has played bass in the Beat Poets for the last 15 years or so. I have helped out at a couple of Glasgow gigs when they were short-handed, including a great night supporting the Nomads in 2002.

I got a phone call last week asking if I would like to play guitar with the Primevals on a French tour in April, with a London gig on the way south. After a wee while to think about it I said yes. It'll be a week's holiday from work, and a last (?) chance to tour Europe. I played in Paris with the Primevals first time round, in January 85. France has always been supportive of the band, with several albums released on New Rose. 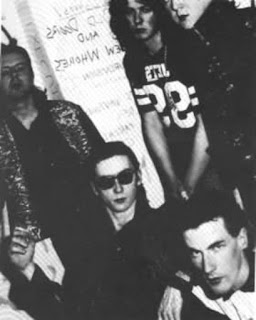 I thought I'd start a blog to record how I get on.
Posted by elhombremalo at 11:15