Seven. That's not bad at all.

A good, productive day at FM, just by Ravenscraig. We recorded 7 songs in 8 hours.

We were fuelled by the One True Source for Jock & Roll - Tunnocks. 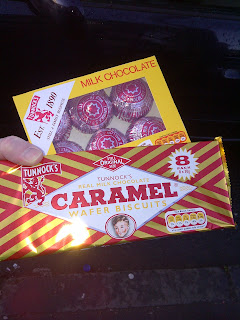 I took 3 guitars along - 2 Moons and a DeArmond 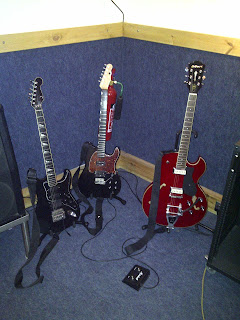 I used the DeArmond for most of the rhythm, the Moon Tele for "Comin' From The Hills", and Big Black (the other Moon) for all the lead and slide.
We recorded -
We were still doing a bit of shaping the songs as we went - but it is very useful to listen back properly to something because when you are in the middle of playing it, you aren't the best judge of whether or not it works.
As always, plenty laughs and daftness as we went through.
I can't make tomorrow's recording - they'll be finishing the vocals, adding keyboards, percussion, and Martin's overdubs.
We got one of the photos that John took at the last rehearsal - here's a photo of the glossy photo 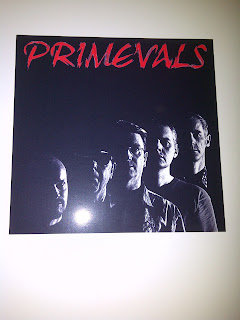