Damp drizzly weather, but a good drive in to Paris. As we got nearer Paris, the rain got worse. And worse. We're from Glasgow - this was proper rain. Of course this was also the point in the tour when we had a couple of hours for tourism - we ended up ducking around Montmarte as the rain battered down, then going to buy a snare drum skin. Paul asked us beforehand "what's 14 inches in centimetres?" and then in the shop baffled the assistant by asking for a 36cm snare drum skin. "What's that in inches ?" was the reply.

We met up with Jes again, and went back to his lovely flat for a bite to eat and an hour of chilling out playing "guess the singer" with his fabulous  record collection. Della Reese stumped us all, much to his delight.

We had two supports for the gig in Paris - lovely guys who are friends of the band - The True Faith and The Dick Tracy Lords. A good club, good stage sound, and another full set. Onstage I wore the jacket that I wore to Paris with The Primevals in 1985 - live photos to follow once we have them !

Ricky, our singer's brother and dear old friend of all of us, came over for this gig. Much hilarity. 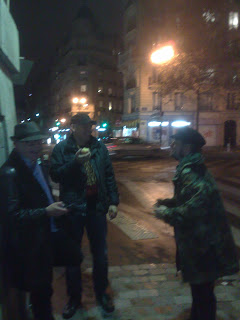 We had planned to get out early as the drive the next day to Pau is massive - best part of 800km. But we got chatting and .... so at 2am we were back in Jes' and at 7am we were in the van at the National, waiting for the rest of the touring party. I stood outside a cafe to get some air and was surprised to think "that smells delicious" when a man walked past smoking. I haven't smoked since 1986, have no desire to start again - France is still a very smoky place! On the road for the drive - I slept for the first wave while Bernard took an hour to grind through really grim traffic - nose-to-tail at 7:15am- then Paul drove. I drove a little bit in the middle, great fun. Interesting to see more of the country.

Pau - The Showcase - another great venue. Lovely paella, lovely cheese from the Pyrenees, lovely friendly people in the bar. I enjoyed a 51 on the recommendation of a friend from the sud  - it was fab. The True Faith supported again - they were more liberated, freer down here - rocking ! throwing shapes !

When we were waiting outside the venue, a local journalist had come up and chatted, then interviewed us. He'd said he couldn't stay for the whole set as he had to be at another show too. So I was pleasantly surprised when he appeared at the end - then asked about my guitar! I directed him to Serge, who owns it. We have a running gag in my own band, the Beat Poets, that after gigs the general public approach Keith, our sax player, and I get people who want to discuss reverb units and guitar technology in general - this holds true in the South of France too ! 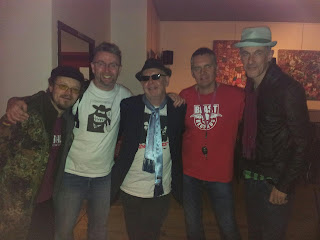 Photo of the band after The Showcase gig

Another lovely late night, chatting, mostly in French with fans - then back to the lovely house of Christian & Fabienne. Christian is Bernard's twin brother - he has refurbished a lovely old house that had previously been squatted. Cool guitars around, lovely photos on the wall of Aretha, the Stones - and a signed Fleshtones poster ! Very much our kind of people. 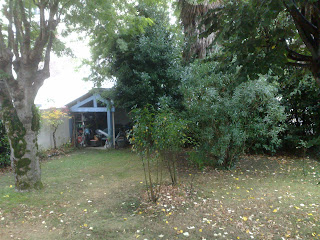 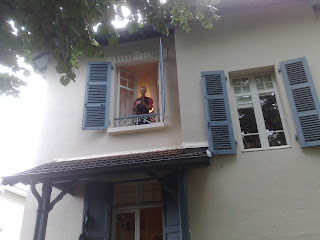 The next day, a lovely lunch in The Garage with everyone before we headed on to Dolmayrac - they were gigging in Taubes with The Jerry Spider Gang. I had a lovely long chat in French with Adrienne - Bernard was greatly encouraging me to speak more French, and I had been re-learning some words and also learning new ones to be able to explain that my godson was coming from Annecy to Toulouse for the gig.
Posted by elhombremalo at 13:05