Paul had brought effervescent Vitamin C tablets - it's a man's life in the Primevals - and they were a good start to the day!  A pretty good drive to Rennes, which we didn't get to see much of last time. We were all pleased that the set had worked, and relieved (but not surprised) that the borrowed equipment was up to scratch. 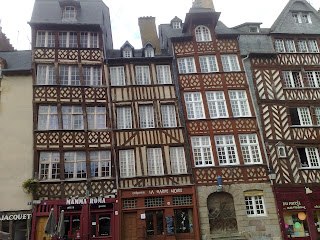 We met up with Seb, who runs Beast Records - they put the new LP out - in his shop. We had an hour or so to go and do some quick shopping - a guitar strap and some presents to take home - then the gig. A much trickier get-in than last night - 100 yards on a  cobbled street then down a tiny dimly-lit staircase.

A smaller PA too - so we did out best to get levels set but had to turn the amps up onstage as the crowd at the front soaked up all the guitars. A very sweaty gig, low ceilinged cellar, but great fun. Some old friends were there, including Mif who knew the band from touring with The Cramps in 86, Patrick who had told me last time we played Rennes "I have waited my whole life to see this band" and Jes's daughter who is studying in Rennes. She was tickled that when Michael, John & Paul stayed with Jes on Saturday, Michael had approved of her record collection before sleeping in her bedroom.

Back to Seb's for a quiet glass of wine and preparations for a long drive to Lille the next day. 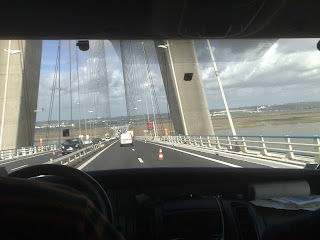 L'imposture is a little bar, very rock & roll - we were all agreeing that this couldn't work at all in Glasgow. As soon as we got there, John & I headed off to the pharmacy - and we agreed that this must have been exactly what The Heartbreakers did every time they hit a new city. One small difference - we were going to buy deodorant. 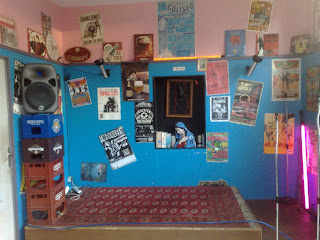 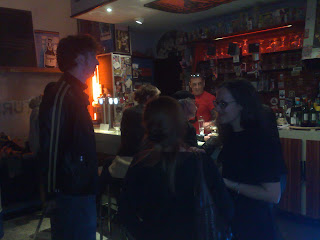 Malik, the owner, greeted us with beers then we got set up. A small crowd but very enthusiastic. Another hot and sweaty night, and back to Malik's for more beer and chat - his wife's mum is Scottish, so she was delighted to have Scottish accents in her house.